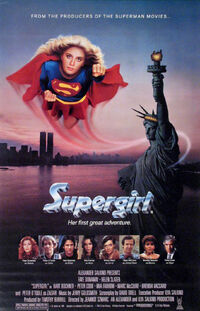 Supergirl is a 1984 film based in the DC Comics character starring Helen Slater as the titular character, alongside Faye Dunaway, Mia Farrow and Peter O'Toole. In the film, Supergirl must find the powerful orb Omegahedron in order to save Argo City. The film met extremely negative reviews and was a huge commercial failure.

Kara Zor-El lives in an isolated Kryptonian community called Argo City, in a pocket of trans-dimensional space. Zaltar allows Kara to see a unique and immensely powerful item known as the Omegahedron, a baseball-sized sphere which he has borrowed without the knowledge of the city government, and which powers the city. However, after a mishap, the Omegahedron is blown out into space. Much to the distress of her parents, Kara follows it to Earth and undergoes a transformation into "Supergirl" in the process, in an effort to recover it and save the city.

On Earth, the Omegahedron is recovered by Selena, a power-hungry would-be black magic witch assisted by the feckless and long-suffering Bianca and seeking to free herself from her relationship with warlock Nigel. Whilst not knowing exactly what it is, Selena quickly realizes that the Omegahedron is powerful and can enable her to perform real magical spells. Supergirl arrives on Earth and discovers her powers. Following the path of the Omegahedron, she takes the name Linda Lee, identifies herself as a cousin of Clark Kent (whom as Superman is off-world), and enrolls at an all-girls school where she befriends Lucy Lane, the younger sister of Lois Lane who happens to be studying there. Kara also meets and becomes enamoured with Ethan who works as a groundskeeper at the school.

Ethan also catches the eye of Selena, who drugs him with a potion to make him love her. However, Ethan regains consciousness in Selena's absence and wanders out into the streets. An angry Selena uses her new-found powers to animate a construction vehicle, which she sends to bring Ethan back, causing chaos in the streets as it does so. Kara rescues Ethan and he falls in love with her instead while in guise of Linda Lee.

Supergirl and Selena repeatedly battle in various ways, until Selena uses her powers to put Supergirl in an "eternal void" known as the Phantom Zone. Here, stripped of her powers, she wanders the bleak landscape and nearly drowns in an oily bog. She's found by Zaltar, who likewise has been exiled to the Phantom Zone as a punishment for losing the Omegahedron. Zaltar sacrifices his life to allow Supergirl to escape through a vortex atop a steep cliff.

Back on Earth, Selena misuses the Omegahedron to make herself the "Princess of Earth", with Ethan as her lover and consort. Emerging from the Phantom Zone, Supergirl regains her powers and has a final confrontation with Selena. Supergirl defeats Selena and exiles her and Bianca to the Phantom Zone. Free from Selena's spell, Ethan admits his love for Linda and that he knows that she and Supergirl are one and the same, but knows it is possible he may never see her again and understands she must save Argo City. Kara flies up and away into the time-void and returns the Omegahedron to a darkened Argo City, which promptly light up again.

Upon gaining the film rights for Superman in 1974, Alexander Salkind and his son, Ilya, also purchased the rights to the character of Supergirl, should any sequel or spin-off occur. The first major casting choices for the movie were Dolly Parton as Selena, and Melanie Griffith or Brooke Shields as Supergirl. These were Ilya's top choices, but they were ultimately rejected by both Alexander and the film's director, Jeannot Szwarc, who wanted an unknown actress. In an interview taped to promote the 2000 Anchor Bay DVD release, Ilya Salkind stated that he thought Shields was the better choice. Dolly Parton, Goldie Hawn and Jane Fonda turned the role of Selena down before Faye Dunaway accepted. Christopher Reeve was slated to have a cameo as Clark Kent/Superman was ultimately unable to film any scenes.

Although the Salkinds financed the film completely on their own budget, Warner Bros. were still involved in the production as the studio owned the distribution rights to the film and its parent company, Warner Communications, was also the parent company of DC Comics, which held the original copyright. The entire film was shot, edited and overseen under the supervision of Warner Bros. However, shortly before the film's original Summer 1984 premiere date, Warner Bros. dropped the film in the US due to the disappointing critical and financial performance of Superman III the year before. The film proceeded to be released overseas, however. 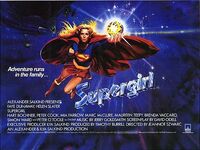 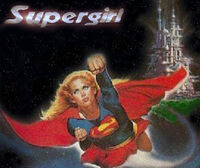 Add a photo to this gallery

Retrieved from "https://superman-anthology.fandom.com/wiki/Supergirl_(film)?oldid=5010"
Community content is available under CC-BY-SA unless otherwise noted.