Kara Zor-El, known as Supergirl, is Superman's cousin from the distant planet Krypton.

Kara Zor-El lives in an isolated Kryptonian community called Argo City, in a pocket of trans-dimensional space. Its leader Zaltar allows Kara to see a unique item known as the Omegahedron, which he has borrowed without the knowledge of the city government, and which can infuse an artificial structure with life. She uses it under the tutelage of Zaltar to make a dragonfly-like creature; this creature breaches a window of the community and in the decompression that follows, the Omegahedron (which also powers the city) is sucked out into space. Kara follows it to Earth in an effort to recover it and save the city, which will die without it.

Using a vehicle called the binary chute to travel between dimensions, Kara arrives on Earth in the form of Supergirl, wearing a female variant of Superman's uniform. She discovers that she has superpowers as she deals with some rather unfortunate characters wishing to do her harm. Finding herself outside an all-girls prep school, Kara disguises herself in the form of a young Earth girl named Linda Lee and gains admittance into the school, where she becomes a roommate to Lois Lane's sister Lucy, identifying herself as the cousin of Clark Kent. She uses a special bracelet on her wrist to track down the location of the Omegahedron, which leads her to the same town the prep school is in. As Linda and Lucy eat out at a restaurant with Jimmy Olsen, Linda spots a runaway construction scooper wreaking havoc all over the street and carrying a young man, barely conscious. She springs into action as Supergirl to stop the runaway scooper and rescue the man, who ends up falling in love with her.

This brings her to the attention of a witch named Selena, who has used a magical spell on the man named Ethan in order for him to fall in love with her, and ends up falling for Kara. Using the power she acquired from the Omegahedron, Selena draws Kara to her and traps her in the Phantom Zone, where she finds out Zaltar was imprisoned in due to his stealing the Omegahedron and causing it to be cast to Earth. Zaltar risks his life to help Supergirl escape from the Phantom Zone, who returns to Earth, regains her powers, and defeats Selena. Ethan admits his love for Kara, but knows it is possible that he may never see her again and understands she must save Argo City. She returns to the trans-dimensional world which lights up again as she brings along the Omegahedron. 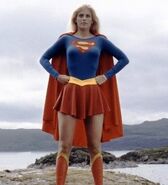 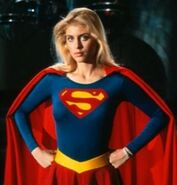 Add a photo to this gallery

Supergirl's superhuman abilities are powered by the energy of Earth's yellow sun in the same way as her cousin Superman.

Supergirl believes strongly in non-lethal combat and has never directly killed anyone using her powers. As a result, she has adopted a fighting style that depends largely on knocking opponents unconscious using her super-strength.

Supergirl is vulnerable to Kryptonite, radioactive remnants of her home planet, Krypton. The known variations of kryptonite affect her in different ways.

Retrieved from "https://superman-anthology.fandom.com/wiki/Supergirl?oldid=5148"
Community content is available under CC-BY-SA unless otherwise noted.